“This is like Christmas,” said Donald Brusewitz, volunteer firefighter.

Firefighters and their families, the mayor, and members of the community have been swinging by just to catch a glimpse, maybe even climb aboard.

Climb aboard what? What's the attraction?

Fire Chief Scott Braith says the department's truck committee has been working on getting the new truck for two years. The first year included lots of research and conceptualizing, with the actual order placed last May. It took a year to build truck, with the committee spending hours collaborating with and even making a couple of trips to visit the manufacturer. After all that, it's no wonder the department's fired up.

“This is just a huge benefit to the community to have three good, usable and dependable trucks,” Braith said. “We'd been down to just two pumper trucks for about a year. Our old truck (from 1980), was taken out of service a year ago because nobody wanted to go into a house, or anything burning, with it. You just couldn't trust it” 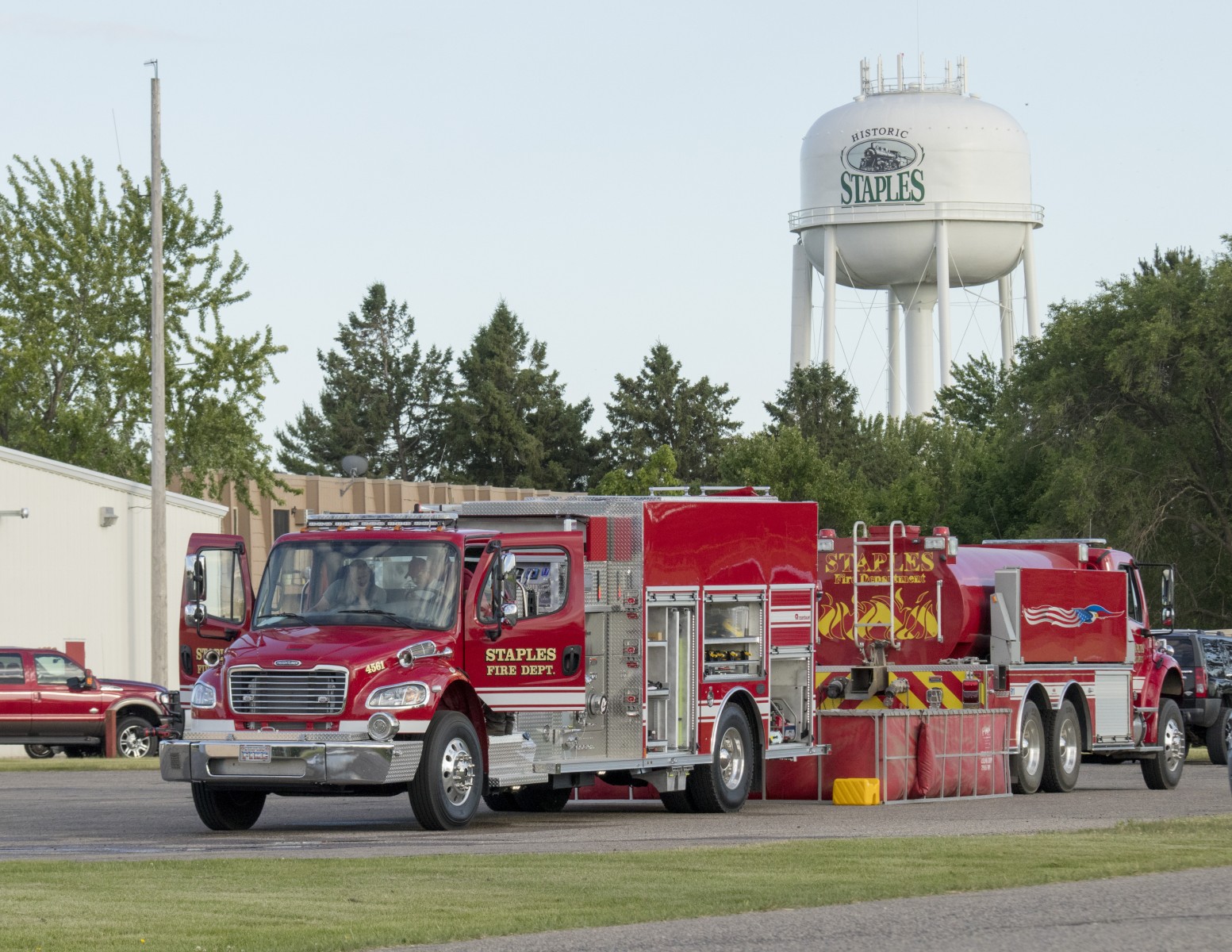 The careful planning yielded a custom-designed truck with enhanced safety and efficiency features, setting the department up to more effectively carry out its mission of serving Staples and its six surrounding townships.

“First and foremost is always safety,” Braith said of the initial planning stages. “For example, on our other pumper, the ladders are up on top in a compartment. You have to crawl up there and pull them out. The big one up there probably weighs a couple hundred pounds, and you're pulling that out over your head.”

Ladders on the new truck are also housed up top, but raise, lower, and adjust by the push of a button, saving firefighters' energy and reducing chances for accidents.

All the lights are LED, making the truck more visible when heading out to a call, and giving firefighters better lighting once on site.

“The LED lights draw way less electricity when you're out on site, and we saved money by not having to put a large, $10,000 generator on the truck,” Braith said. “We did buy a little tiny one to bring with us, just in case.”

The new truck includes more spotlights and lighting options, including an automated and fully adjustable center-mounted spotlight with multiple panel. A remote control maneuvers the height and individual panel angles, ensuring a flood of light in the areas that need it most.

“When we're on the scene of a car accident or at a fire at night, we need to be able to see what we're doing,” Braith explained. “This has way more lighting options. Plus, it's brighter, and now we can put the light exactly where we want it.”

Braith says the committee had the manufacturer configure the pump hookup sites to match its former main pumper, the model from 1997. This will make for a smoother transition.

“Everybody that knew how to run our '97 truck is going to be able to know how to run this truck,” Braith said.

There are a few custom upgrades between the pump system on the older truck and the new, however.

“We knew we were going to go with this open design,” he said. “Everybody's been talking about a design like this since we bought the last one.”

“This way when someone's got the hose and they tell you to shut down the green nozzle – there, that's the one,” Braith said, pointing to a green lever.

Above the control panel, the committee had Rosenbauer add a storage cabinet to house supplies and tools, plus a TV monitor wired to four cameras that show all sides of the truck. The cameras also feed to a TV monitor inside the cab so the driver can also see around the vehicle.

“We have a radio that we will eventually mount in this storage cabinet, too,” Braith said. “It'll have headphones so the operator can hear and communicate with the driver.”

The fire department spent its first evening getting moved in – filling the cubbies and cabinets with tools and other equipment – and becoming acquainted with its new truck.

The city of Staples purchased the truck on behalf of the fire department from Heiman Fire Equipment, a Rosenbauer dealership based in Sioux Falls, South Dakota.

As a member of National Joint Powers Alliance®, the city bought the truck using one of NJPA's cooperative contracts. Using the contract saved the city at least $10,000 on the purchase, plus thousands more in the time, energy, and resources it would've taken to go through the traditional bid process. NJPA had already conducted the competitive solicitation process on behalf of all its members and awarded Rosenbauer as a contracted vendor.

Braith says the purchasing part of the project was straightforward. The fire department got the exact brand and model of truck it needed, complete with the desired customizations.

“We knew we wanted a Rosenbauer truck and we knew they were on contract with NJPA,” Braith said. “I asked our salesman what we needed to do, and he told us we all we had to do was be a member of NJPA. From there, it was very simple.”