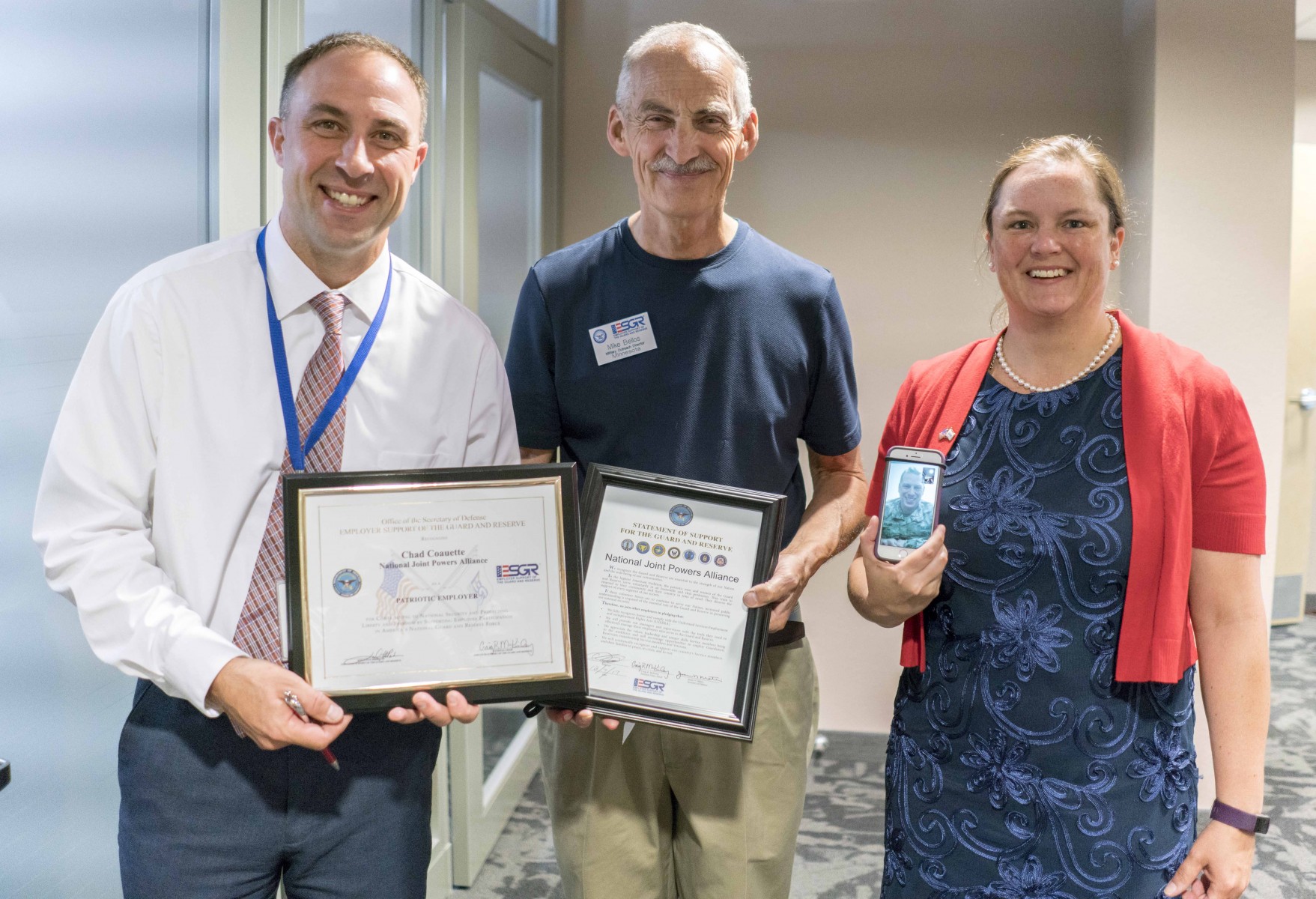 On Wednesday, Dr. Chad Coauette (left) was presented the Patriot Award by ESGR volunteer, Mike Bellos (center) in recognition of his extraordinary support of Captain Greg Grunig and his family. Grunig is an employee at NJPA and is currently deployed on assignment in Kuwait. NJPA HR Manager Becky Cromwell (right) ensured Grunig was part of the ceremony via video call.

The award is given by the Employer Support of the Guard and Reserve (ESGR), a Department of Defense program established in 1972 to promote cooperation and understanding between Reserve Component Service members and their civilian employers.

Grunig, a 10-year member of the Army National Guard based at Camp Ripley in Little Falls, called in via cell phone video to participate in the ceremony.

In his nomination, Grunig cited the overwhelming appreciation and accommodation he received from Coauette. He began in his role at NJPA on January 29, 2018, and was deployed to Kuwait in early March.

He wrote, “I accepted a new position at NJPA and began work 4.5 weeks prior to being deployed with my unit. The Executive Director/CEO has been hugely supportive of my service and recognizes the sacrifice I am making. He has thanked me for the military experience I bring to the organization. He has empowered the leaders at NJPA to take it upon themselves to do what it takes to ensure that I am included and up to speed in my role, even knowing that I would only be there a short time before I deployed.”

Grunig noted that in anticipation of being out of the office on his last work day before deployment, Coauette sought him out early in the week – even interrupting a meeting – to ensure he had the chance to personally wish Grunig well.

Coauette was honored and surprised at the recognition.

“I'm very humbled and honored to be recognized,” said Coauette. “This reflects our organization and not just me, specifically following Memorial Day and all that means to our country, to the families of those who have served, and those who are currently serving. Thank you to those men and women. And thank you to Greg for this nomination. We owe a lot to you and I am humbled to accept this.”

Grunig is serving his second deployment. He is expected to return in January 2019.

ESGR volunteer Mike Bellos presented the award. He also provided NJPA with an official framed “Statement of Support for the Guard and Reserve” to affirm the organization's commitment and backing of service members. The statement is signed by Craig R. McKinley, National Chair of ESGR, and James N. Mattis, Secretary of Defense.

This is the second Patriot Award given to NJPA leadership. The organization's Procurement Manager, Chris Robinson, was recognized for his support of Sergeant Staff James Voelker back in December 2017.