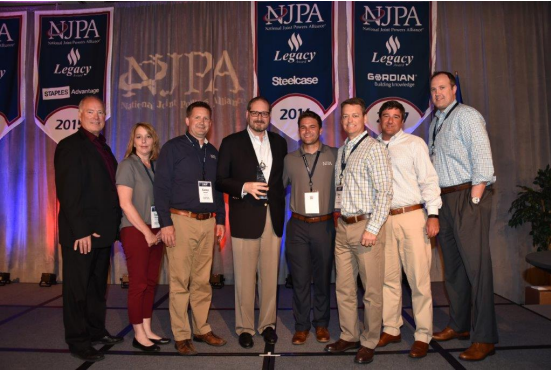 STAPLES, Minn. (9 June 2017) -- If there was ever a question of what the National Joint Powers Alliance® (NJPA) way of business looks like, all one would have to do for the answer is point to the recipients of the 2017 H2O Vendor Forum awards.

Seven individuals, the State of Maryland, and Gordian were honored at NJPA’s annual event for exemplifying extraordinary leadership, business innovation, and exemplary service to NJPA members. The awards were presented June 7 at the 10th annual H2O Vendor Forum at Madden’s on Gull Lake in Brainerd, Minn.

The NJPA Pioneer Award recognizes individuals who have demonstrated commitment, persistence, and influence. Recipients embody a pioneer approach to creative sales strategies that achieve the highest level of contract embracement at all levels throughout the company sales network. They are visionary, leading a company to a better way of business through a higher level of NJPA contract success.

NJPA Pioneers serve as a model and starting point for others, highlighting the NJPA foundational belief, “we all benefit from the success of others.”

The following were recognized as Pioneers:

The NJPA Legendary Leadership Award recognizes an individual from an awarded vendor’s senior management team who has demonstrated commitment, innovation, persistence, and achievement that aligns with NJPA’s vision to create valued contract solutions for member agencies.

Fate may have been a factor as Staples and NJPA crossed common paths at a national education trade show. The organizational structure and unique approach to business prompted Staples to take a serious look at NJPA as the gateway to effectively leverage business in the government and education market. In 2005, Staples responded to NJPA’s IFB, and was awarded the first-ever NJPA national office and classroom supplies contract.

Neil had a way of positioning ideas with upper management and making what seemed to be a risky venture, an opportunity and acceptable business pathway. Staples senior managements trusted Neil’s instincts and was an early supporter of his new approach to developing possibilities to grow the Staples business. This level of support continues to be the foundation for Neil’s leadership. What began as an idea now is a proven way of business for Staples and NJPA. Neil’s persistence moved the NJPA and Staples contract closer to a business model that consistently resulted – and continues to result, today – in government and education agencies across the country buying what they want and when they need it.

The NJPA Gold Star of Business Innovation and Excellence Award recognizes an NJPA member entity that demonstrates innovative business, contracting, and procurement strategies. The award applauds the level of leadership required to develop and embrace new business concepts, while striving for maximum efficiency.

Individuals with a forward-thinking mindset are at the helm of the state of Maryland’s Department of General Services (DGS). The state truly led contract advancement as the first state to adopt an NJPA contract as its own – the Staples office supplies contract – back in the early 2000s. Cooperative contracting with NJPA, or any other cooperative, was not a common way of business for the state of Maryland, or any states on the East Coast at the time.

The senior staff at DGS demonstrated exceptional leadership communicating the advantages with confidence, which led to the acceptance by the state agencies and the local communities. This positive influence ensured the overall success and proved the widespread value that resulted in increased efficiencies. From the beginning, Maryland DGS did not waver in its commitment and support of NJPA and the new cooperative contracting way of business. Maryland’s leadership, and commitment to innovation and efficiencies, established and advanced a level of trust and credibility with the business community that has truly been instrumental in increasing the acceptance of, and comfort with, cooperative contracting throughout the East Coast and the United States.

The NJPA Legacy Award recognizes an NJPA awarded vendor that demonstrates commitment, innovation, and persistence. It recognizes the level of leadership it takes to forge uncharted business concepts, while facing the risks involved with changing the way the game of business is played.

Gordian began its journey with NJPA in 2007, when the NJPA way of national cooperative contracting was still relatively new. Driven by its strong business instincts and desire to forge a long-term pathway to business efficiency, Gordian’s management team molded a business model and embraced the NJPA contracting process that was, and still is,uniquely designed to award contracts and contractors locally. The process was carefully developed with duplication in mind so entities nationwide could benefit.

Through true teamwork between NJPA and the Gordian team, the unique cooperative business and contract mode, “EZIndefinite Quantity Construction Contract” or ezIQC, was born. The procurement process and the facilitation of construction projects are now much more efficient for NJPA members. The streamlined approach of the NJPA ezIQC program has had a direct impact on taxpayer savings by improving and stimulating the local and overall economy and business climate across the country.