Just in Time for Kick-Off

Just in Time for Kick-Off

University of Iowa turns to Sourcewell vendor for turf replacement 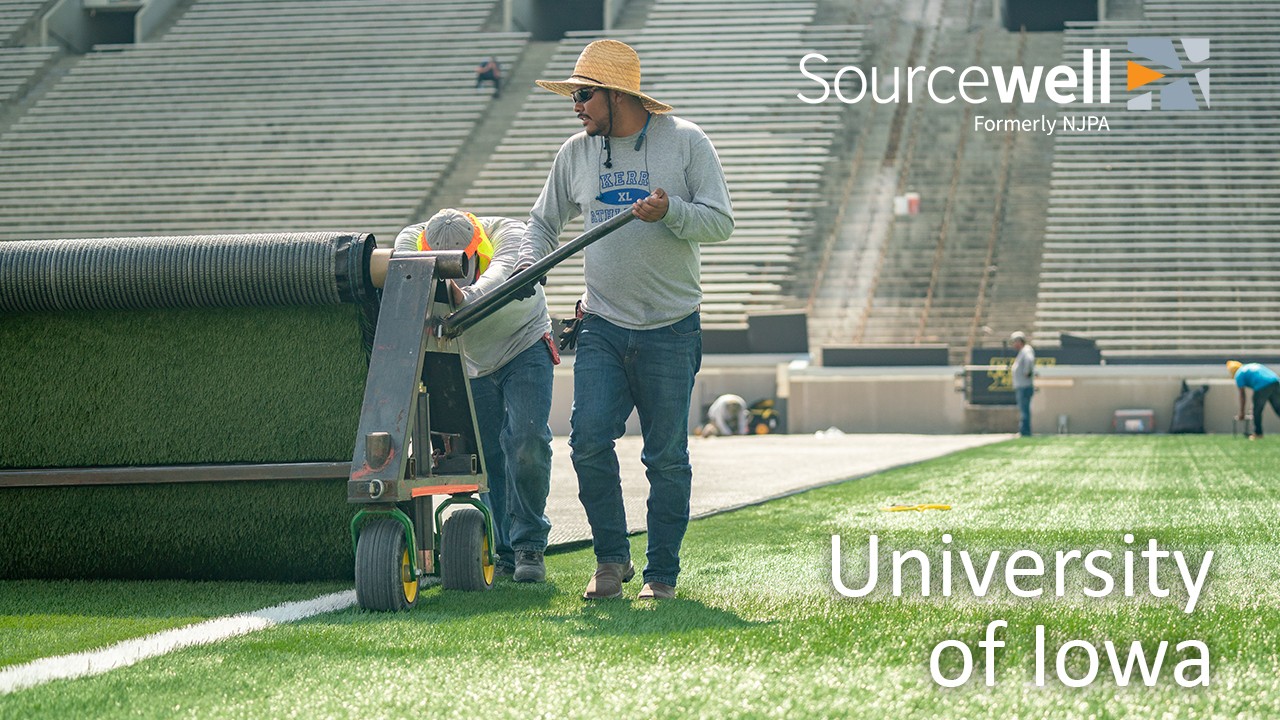 In 2018, flooding and subsequent drainage issues ravaged Kinnick Stadium forcing the university’s hand and requiring total turf replacement in 2019. So, when the skies once again turned clear, the University of Iowa turned to Sourcewell.
“

There’s a lot of Hawkeye fans across the nation. Having a safe, playable field and having those home football games is really important to the institution. It’s important to our fans.

Michael Kearns, construction project manager at the University of Iowa
„

In September 2018, just four days before the first home football game, the beloved home of the University of Iowa’s Hawkeye football was in deep – deep water, that is. Flooding throughout the region put Kinnick Stadium underwater. Although the field was made safe in time for kick-off, university officials realized the turf was aging quickly and deemed the best long-term solution for the field to be complete replacement.

“There’s a huge fanbase in the state of Iowa,” explained Michael Kearns, construction project manager at the University of Iowa. “There’s a lot of Hawkeye fans across the nation. Having a safe, playable field and having those home football games is really important to the institution. It’s important to our fans.”

With a small window of opportunity opening the next summer, the university turned to cooperative purchasing and kicked off a quick, successful, and under-budget replacement project.

Formerly known as Iowa Stadium, Kinnick Stadium is located near the University of Iowa campus in Iowa City, Iowa. According to the university, Kinnick is one of the 25 largest college-owned stadiums in the nation.

Construction on the original 53,000-seat stadium was completed October 5, 1929. The university says construction costs were just shy of $500,000 and took six months to complete. However, time and toll have required modifications throughout the years, including additional seating to now accommodate over 70,000 fans.

The playing surface has also evolved over time. In 1972, the university installed artificial turf and replaced that turf in 1981.

In 1989, the university opted to install a natural grass playing field, which was swapped out with fresh sod prior to the 1997 season and again during the 2005 season. But, in 2009 and again in 2017, Sourcewell-awarded vendor FieldTurf was called upon to install a state-of-the-art artificial turf system to carry the Hawkeyes into the future.

Unfortunately, the future also brought rain – and lots of it. In 2018, flooding and subsequent drainage issues ravaged Kinnick Stadium forcing the university’s hand and requiring total turf replacement in 2019.

So, when the skies once again turned clear, the University of Iowa turned to Sourcewell.

Rainbow After the Rain

Pleased with the convenience of Sourcewell’s competitively solicited contracts and the availability of a trusted and true vendor, the University of Iowa chose FieldTurf, once again, to lay the foundation for a nationally known and locally loved college football team.

“We’ve used Sourcewell in the past and they had a vendor that had turf available that matched the turf that was in the stadium,” Kearns said. “Players are used to playing on it and that’s important, you know, just to have consistency of the playing surface.”

Replacement of the field began in the spring of 2019 and was completed in time to kick-off the first home game of the 2019 season.

“The timelines we were looking at afforded the university an opportunity to start the project and get the material procurement in place. This really was the result of a natural disaster; we just wanted to get it fixed and have a safe, playable field ready for the first home football game.”

And ready it was. The Iowa Hawkeyes not only played the first game of the 2019 season on their new and improved home field, but they also had the home field advantage as they defeated the Miami RedHawks, 38-14.

Save time and money by combining the buying power of more than 50,000 government, education, and nonprofit organizations. Sourcewell holds more than 400 competitively solicited contracts ready for use. Learn more at sourcewell-mn.gov.

Sourcewell (formerly National Joint Powers Alliance) is a self-supporting government organization, partnering with education, government, and nonprofits to boost student and community success. Created in 1978 as one of Minnesota’s nine service cooperatives, we offer training and shared services to our central-Minnesota members. Throughout North America, we offer a cooperative purchasing program with more than 400 awarded vendors on contract. Sourcewell is driven by service and the ability to strategically reinvest in member communities.