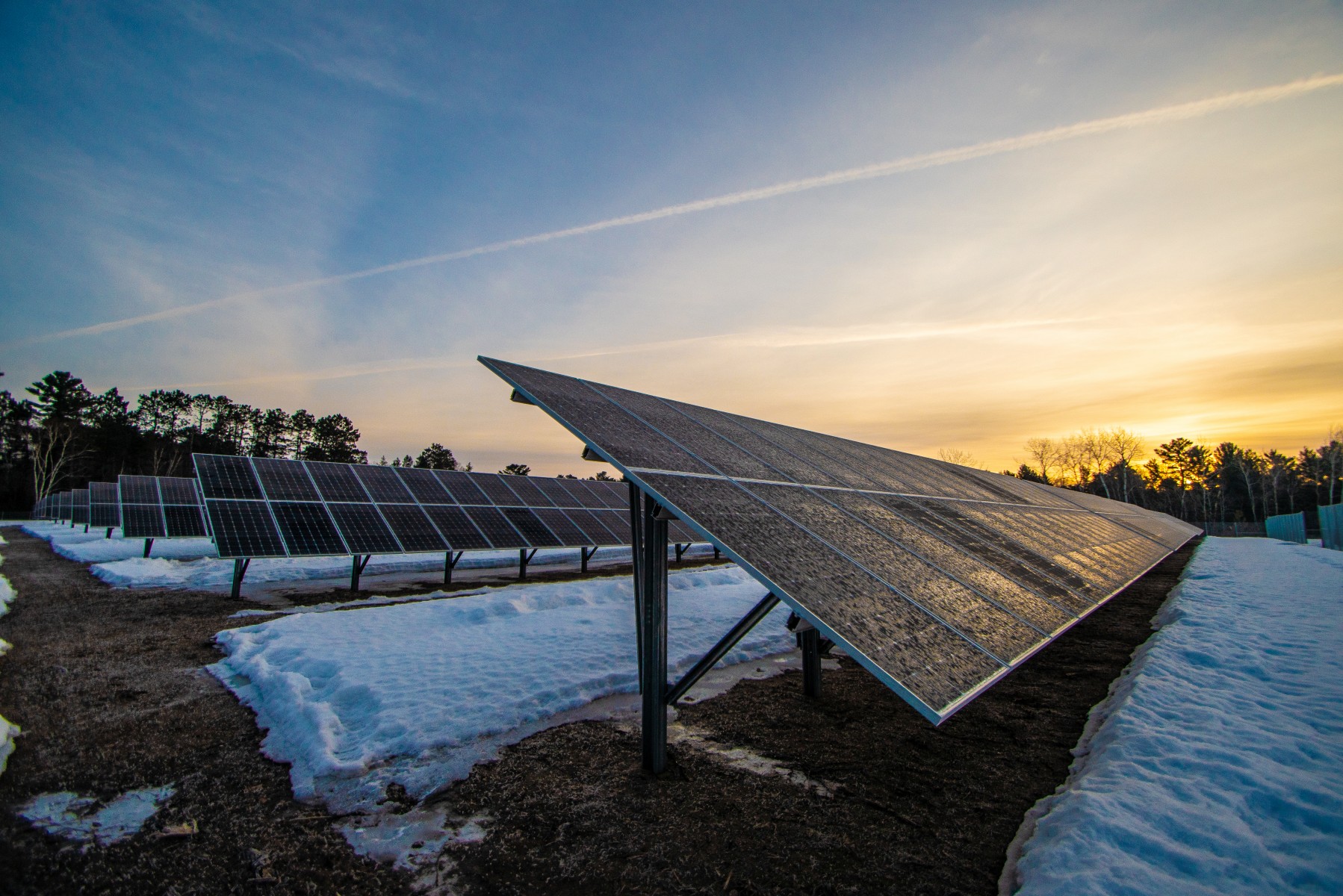 The largest school solar project of its kind, the system is anticipated to produce roughly 1.14 million kWh annually, or 80 percent of the Pine River-Backus School District’s electricity load.

In the process of getting his master's degree, finances were tight, and, as colder temperatures encroached, he found himself and his family at a crossroads.

Having grown up in a low-income family, he knew all too well about the Energy Assistance Program offered at the state and national levels. And, while Edens knew this was an opportunity to provide necessary services for his family, he had an alternative idea.

With an interest in, and experience with, solar energy, Edens made a unique request to the powers-that-be behind the Energy Assistance Program: Would they help financially support a no- or low-interest loan to allow Edens to install a solar energy system at his home?

The lack of interest in helping support a sustainable source of energy left Edens feeling down yet determined.

Shortly after, a family friend called. Knowing Edens' interest in solar power, the friend shared that his house had recently sold but the buyers wanted nothing to do with the solar panel system previously installed on the property, so it was being thrown away.

“So, I drove down there and literally pulled it out of the dumpster,” he said.

In doing so, he saved his family enough money in power bills that financial assistance was no longer needed.

“That's when I had an aha moment,” he said. “If this technology could prevent a relatively low-income family from needing energy assistance, this could be a model we should consider more broadly for energy assistance across the country.”

In the confines of a small garage in Backus, a nonprofit, the Rural Renewable Energy Alliance (RREAL), was born.

It wasn't long until this aha moment project outgrew Edens' garage space and moved to the Hunt Utilities campus in Pine River. In 2014, RREAL purchased property in Backus.

For nearly two decades, Edens and RREAL have dedicated time, talent, and treasure to making solar energy accessible to communities of all income levels through the Solar Assistance program, which provides solar energy systems to low-income families and communities as a sustainable solution to energy poverty.

While government-operated energy assistance programs provide much-needed help to those struggling with energy poverty, Edens believes it is an expensive Band-Aid.

“It doesn't help lift people out of energy poverty, and it costs taxpayers a substantial amount of money,” he said.

According to Edens, the state of Minnesota spends $120 million a year to provide energy assistance for approximately 26 percent of residents. Nationally, the bill is closer to $3.5 billion.

Edens believes through the implementation and integration of solar power, we have access to a sustainable and fiscally conservative option in sourcing energy.

“When we began here in the booming metropolis of Backus, we were the only organization in the country providing solar energy to low-income families,” Edens noted. “Today, it's part of a national conversation.”

In 2014, Jason Edens and the Rural Renewable Energy Alliance began working with Sourcewell and the Region 5 Development Commission to bring the benefits of solar power to Region 5 school districts.
In February 2019, RREAL completed an 808-kW solar array for the Pine River-Backus School District.

Since 2000, RREAL has provided nearly 500 solar energy systems to low-income households at no cost to the homeowner, as well as provided design-build services on projects throughout 11 states. In 2014, RREAL began working with Sourcewell and the Region 5 Development Commission (R5DC) to bring the benefits of solar power to Region 5 school districts.

R5DC had been awarded a Renewable Development Fund Grant from Xcel Energy to develop 1.4 megawatts of solar power on education facilities in the region. Listug's role was to advise R5DC on the grant compliance and project development, and execute the necessary legal documents among Xcel, the schools, finance partner New Energy Equity, and eventually the contractor for the project.

“Sourcewell's involvement in the project was unique in that we were able to leverage my law license to support regional partners to complete a one-of-a-kind, multi-site, complex project to provide a direct benefit to the schools involved,” Listug explained.

In February, RREAL completed an 808-kW solar array at the Pine River-Backus School District. The largest school solar project of its kind, the system is anticipated to produce roughly 1.14 million kWh annually, or 80 percent of the district's electricity load.

As a former high school teacher, Edens could attest - first hand - to the budgetary restrictions faced by schools.

By May 2019, RREAL hopes to have completed a 354-kW solar roof mount at Pequot Lakes High School and a 333kW system at Central Lakes College's Brainerd and Staples campuses.

In addition to designing and building solar energy systems for and with regional schools, RREAL is also working with each district and school to help develop a Solar for Schools curriculum, bringing age-appropriate STEAM (Science, Technology, Engineering, Art, and Mathematics) opportunities to all grade levels.

“Today's youth are making tomorrow's energy choices,” Edens said. “It's critical we educate them in the importance of harnessing solar energy and to demonstrate the possibilities that exist within the technology.”

Edens and his board of directors at RREAL have become involved with the recently created nonprofit support arm of Sourcewell. Participating in succession-planning courses offered at Sourcewell, as well as tapping into funding and internship opportunities, Edens said he truly appreciates the fact that nonprofits are being acknowledged, valued, and supported.

“I'm excited about the fact that Sourcewell is filling the voids that have existed in nonprofit support systems,” Edens said. "There seems to be this perception that nonprofits aren't part of the economic development of our region. And I take issue with that. Nonprofits come in a wide variety of shapes, sizes, and functions. Some are very small with a specific footprint, and some have a municipal-based mission. But there are also nonprofits doing millions and millions of dollars' worth of business - hiring people, creating career opportunities in rural communities.

“By embracing nonprofits in its suite of services, Sourcewell is recognizing nonprofits as an essential part of the fabric of our community. And for that, I am grateful.”

Sourcewell (formerly National Joint Powers Alliance) is a self-supporting government organization, partnering with education, government, and nonprofits to boost student and community success. Created in 1978 as one of Minnesota's nine service cooperatives, we offer training and shared services to our central-Minnesota members. Throughout North America, we offer a cooperative purchasing program with over 325 awarded vendors on contract. Sourcewell is driven by service and the ability to strategically reinvest in member communities.