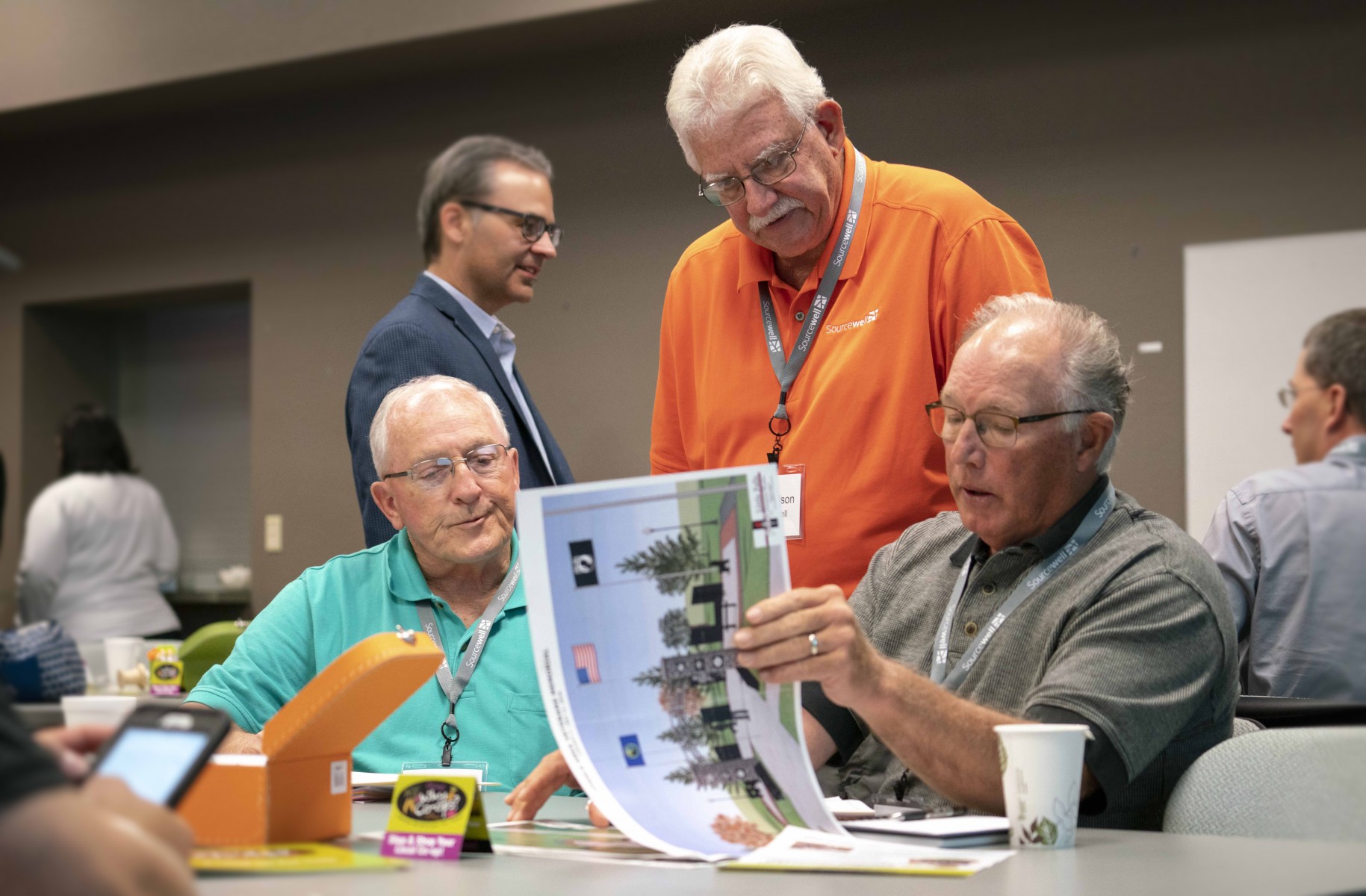 Mike Wilson (in orange) recently retired after 17 years serving on the Sourcewell Board of Directors.

Mike Wilson has earned the right to use the adage, “I remember when.”

For 17 years, as a member of the Sourcewell Board of Directors, Wilson has had a place at the table where he has witnessed, and been part of, rapid growth and evolution of the region's service cooperative.

Wilson was a board member of the Pierz School District when he first learned of an opening on the board of directors for the North Central Service Cooperative, a name Sourcewell once held. He was on the NCSC board when the organization was renamed the National Joint Powers Alliance (NJPA) in 2004. In 2018, he supported the rebrand to Sourcewell.

A self-sustaining government organization, Sourcewell has more than 40 years of dedicated service helping government, education, and nonprofit agencies operate more efficiently through a variety of solutions. While the organization's core purpose, designated by Minnesota statute, is to partner with schools and government agencies in the assigned geographic region of Cass, Crow Wing, Morrison, Todd, and Wadena counties, Sourcewell has since grown to provide solutions and services throughout the country.

In addition to a name change, or two, Wilson has been an integral part of Sourcewell's organizational growth for nearly two decades.

A sampling of highlights includes the nationwide expansion of cooperative purchasing, the addition of several new regional programs and services, and building a new facility on the east side of Staples. In the last decade, the staff size went from 60 to just over 200.

“I don't think anybody could ever perceive where we would be at today,” he said of the organization's growth.

In 2002, the organization offered a lone awarded contract with Sharp, providing copier solutions and services. Today, Sourcewell offers participating agencies more than 450 supplier contracts available throughout the United States and parts of Canada.

Wilson noted it was because of this intentional expansion of cooperative purchasing that Sourcewell was able to dedicate additional resources on a local level. While national contracts were the driver, the people of Sourcewell's assigned region were always the focus for Wilson.

“Every time we do something, we really think of regional,” he said. “Whether it's the money we give out to each of the counties or school districts… Whether we’re small or large… it's all about people.”

A mission coming to fruition

Sourcewell has also committed to reinvesting in the region in a number of ways, Wilson said, including funding for four Setting IV education facilities, collaboration and funding opportunities, professional development, public safety training reimbursement, educator and student recognition events, and much more.

“I think the future of where things go is where we can think,” Wilson said, considering what may lie ahead for Sourcewell. “I know that we can do whatever we set out to do because I've seen that. And, again, all that takes are the right people that can see that future.”

And while Wilson has been an important part of supporting success into the future, he said he knows the time has come to pass the baton and allow others to guide the organization from the board table.

“I think I'm at that point where it's time to let somebody make the new advancements,” Wilson said. “Sourcewell seems to be an organization that never stops growing and looking at the future. And that's what it's all about. I’m going to miss that; except I'm also going to be glad to sit on the sidelines and watch it.”

Sourcewell Executive Director and CEO Chad Coauette said the organization wouldn't be where it is today without the support and vision of Wilson.

“Board members like Mike are such an incredible asset to our communities and schools” Coauette said. “Individuals like him support our organization, which in turn supports community success in a wide variety of ways. They are people elected to their communities first, but then elected to become part of our Sourcewell board. And that says a lot. Mike will most certainly be missed, but I'm confident he will continue to be one of our organization's biggest cheerleaders from wherever he sits.”

About the Sourcewell Board of Directors

Sourcewell's Board of Directors is charged with the care and management of Sourcewell, as stated by Minnesota statute. The eight-member board is comprised of elected officials, including six local school board members and two elected representatives from member cities, counties, or other government agencies within the region.