Thanks to a student-driven initiative, and special project funding by a variety of donors, including National Joint Powers Alliance®​, students at the district's secondary school have committed to “Ban the Bottle” and eliminate the use of disposable water bottles. 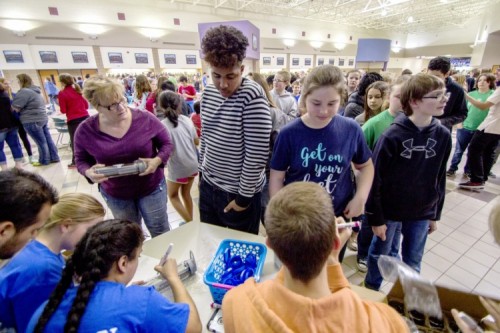 LPGE secondary social studies teacher, Pete Phillips​, leads a class called Area Studies. Phillips said last year's Area Studies students launched a Green Initiative with a commitment for the class to do something environmentally friendly for the school, its students, and the community on an annual basis. For its inaugural Green Initiative, Phillips' class set, and reached, a goal to have water bottle filling stations installed in the school. This year's class wanted to take it one step further.

Student Joseph Gillis said he and other students wanted to take a stand after watching classroom videos addressing the water shortage in the Middle East and Africa, and learning about the Great Pacific Garbage Patch, a collection of litter --mostly plastics - in the North Pacific Ocean.

“I think on the simple form, we want to give everyone a reusable water bottle that they can use day in and day out to get refilled (with) tap water,” Gillis said. “But I think on a larger scale, we want to raise awareness for kids to think about these small things, because you never really think that bottled water would be a problem. You think it'd be a major modern convenience. But from the research, we've proved that even something like that can be a problem that people have to think about.”

Student Alison Gugglberger says prior to having the hydration stations and water bottles in place, many LPGE students purchased a bottle of water at school for $1. This resulted in excess waste in that students were spending money on something they could get free from a fountain, and empty bottles were usually thrown in the garbage rather than in the recycling bin. Now students have a durable reusable bottle to carry with them, and they can also take pride in knowing they're playing a part in helping the environment.

With guidance from Phillips, Area Studies students conducted their own research on water bottles, gathering samples and conducting surveys. After determining the need and price points, students created a plan to solicit and secure funds in order to provide all students in 7-12th grade a non-toxic and personalized reusable water bottle. The class also worked into its budget extra money to fund a campaign to raise awareness not only in their school, but throughout the community.

On March 31, all students and staff at LPGE Secondary School attended a symposium led by those involved in the Area Studies Green Initiative. The students' presentation emphasized the importance of drinking water and the environmental impact and health risks associated with plastic bottled water. Following the presentation, the class handed out over 400 water bottles.

Each grade level received a different colored bottle, adorned with the LPGE mascot and respective sponsoring organization logos. Students were also given a “Ban the Bottle” bracelet to remind them to use their water bottles wherever they go in lieu of the disposable plastic counterpart.

Students in the Area Studies Green Initiative applied for funding through NJPA's Small Project Partnership. Small Project Partnership is a new funding opportunity that aims to support projects smaller in scope than the traditional Innovation Funding projects. NJPA funds a maximum of $2,500 per entity per fiscal year, and requires the school district or entity to include a 50/50 financial match.

“Every dollar raised was from the community, including from NJPA, who is a partner with our school,” Phillips said. “The Small Project Partnership from NJPA really made this happen, because we were finding out it was going to be too much money per sponsor, and they matched everything we did.”