One for the Books

One for the Books 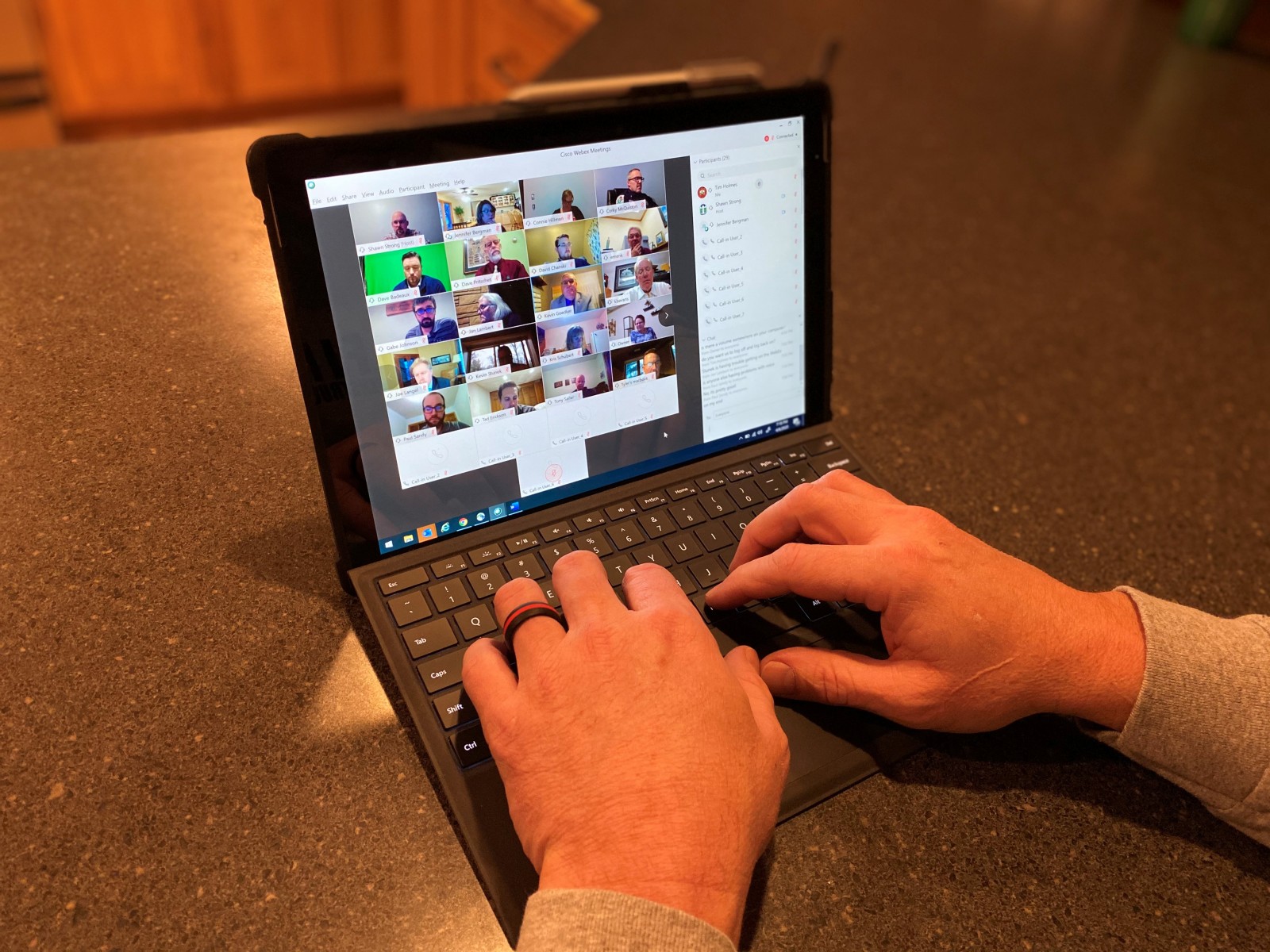 Brainerd city staff, council members, and the general public met via WebEx on April 6 to appoint an interim mayor for the city of Brainerd. A growing number of municipalities are using various videoconferencing methods to meet during the COVID-19 crisis.

Dave Badeaux will certainly have a story to tell when COVID-19 has become all but a distant memory.

On Monday, April 6, Badeaux was named interim mayor for the city of Brainerd. While it may not seem like front-page news, it was the way in which it was done that will likely make the city’s history books.

Earlier this year and after serving since 2015, Ed Menk announced an early departure from his Brainerd mayoral position, necessitating the appointment of an interim mayor.

Brainerd City Administrator Jennifer Bergman said mayoral interviews and a subsequent appointment were initially scheduled for March 23. However, when the Centers for Disease Control released a recommendation of limiting gatherings to no more than 10 people and maintaining a six-foot distance from one another, the city had to get creative.

“The council felt it was important to move forward with the appointment of a new mayor,” Bergman said. “Therefore, we had to determine how we were not only going to hold council meetings in this new reality but also this special meeting to appoint a mayor.”

Shawn Strong is the director of IT for the city of Brainerd. When he heard rumblings that the state may issue a stay-at-home order, his team began looking into videoconferencing options and landed on the WebEx platform.

“The transition was fairly smooth,” Strong said. “We worked through most of the issues on-the-fly by creating meetings and learning as we went along.”

After city staff became comfortable with the new system, a hybrid city council meeting was held with some members attending in person and some remotely.

“We learned a lot about what not to do in that meeting,” Strong said, “As with any new software - or just change in general - some people will catch on quicker than others. In this case, we had some staff click once and away they went, while a few just observed for a couple meetings until they got the hang of it. Now, I’d say, everyone is capable of popping into a meeting and participating as needed.”

In order to make the meetings equally accessible to the public, the city had to get a special license through WebEx to add a toll-free call-in number. At its April 6 meeting, all council members were on the call, as well as city department heads, the four candidates vying for the interim mayoral position, and a handful of individuals from the public.

“For the special meeting, we wanted the interviews to be fair to each candidate,” Bergman noted. “We asked each candidate to join by video so they would have the same opportunity to be interviewed in the same manner.”

Each of the candidates - which included Heather Aanes, Badeaux, Kevin Goedker, and Dave Pritschet - were given five minutes to share why they felt they were the best candidate. The council then had an opportunity to ask questions. At the conclusion, a roll call vote was taken and Badeaux was selected 4-1.

When the council reconvened at 7:30 p.m. for its regular meeting, with right hand raised, Badeaux was sworn in. 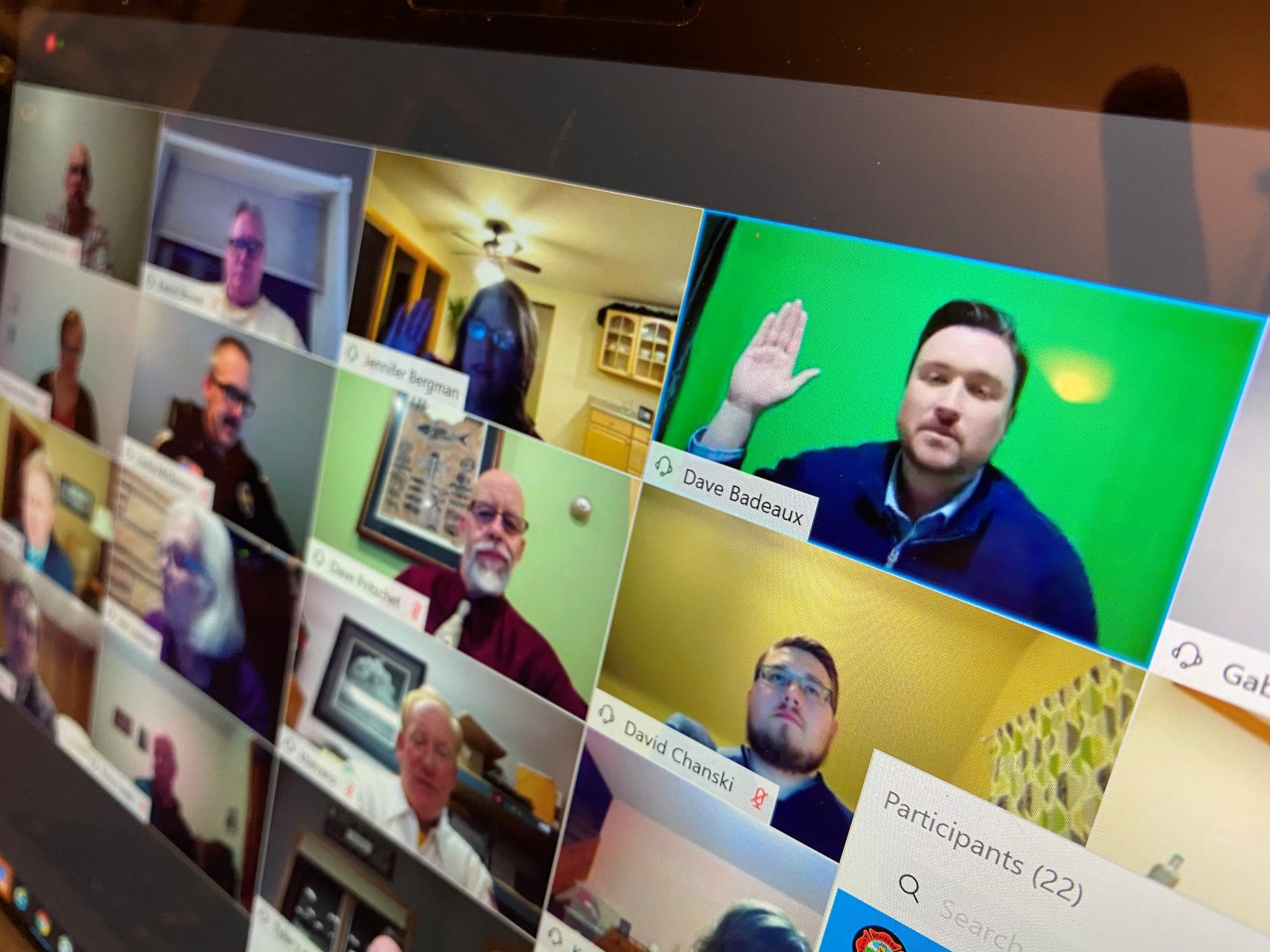 Dave Badeaux was sworn in by City Administrator Jennifer Bergman following his appointment as interim mayor for the city of Brainerd. Badeaux had previously served on the council for four years.

Connecting in an online world

Badeaux, current director of Brainerd Community Action and a four-year member of the city council, said he has used other videoconferencing platforms for communicating remotely - both personally and professionally - and feels, during these unique circumstances, it’s important to carry out open dialogue for public meetings in some way, shape, or form.

“As someone who enjoys face to face interactions, I prefer to be able to feel the room and get interpretive answers based off people’s reactions and their body language,” Badeaux said. "I think the same can be said for members of the general public who may be joining us via phone. Not everyone is looking to speak at public meetings, but their presence can help us as a city gauge the level of concern or support for an issue.

I am extremely happy with the way our citizens have been able to participate in the meetings we have held so far. However, I think it is important for us to make sure we are reaching out and asking questions of the public to ensure they are not encountering issues with the set up that we may not see on our end."

Serving until the end of the year as interim mayor, Badeaux said it’s an important time in which individuals need to speak up and allow their voice to be heard, using whatever means they have available.

“Not being able to attend a meeting in person creates a barrier,” he added. “We are here to represent the public and because of those limitations, other lines of communication need to be as open as possible. We are representatives and I enjoy seeing the public come out and participate in the workings of their city.”

Want to learn more about videoconferencing do’s and don’ts? Sourcewell has shared resources, including a helpful video, to ensure your organization is maximizing its reach. Click here to learn more.