Clean Solutions for Dirty Situations
Preserving the Road to the Future
Things That Make You Go Vroom
Making IT Easy
Let’s Clear the Air
Happy Holidays! 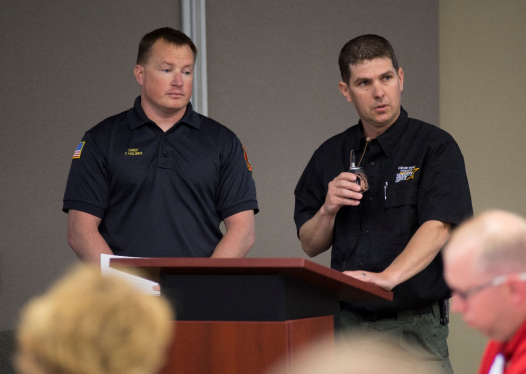 Tim Holmes, Brainerd fire chief, and John Bowen, Crow Wing County emergency management director, spoke on behalf of several emergency response departments within the county seeking funds for the purchase and implementation of an Unmanned Aerial System, or drone, to be shared within Region 5

STAPLES, Minn. (2 June 2017) -- A drone to aid emergency responders, a mobile command trailer to streamline communication in emergency situations, and a specialized camera system for public sewer inspections are just some of the regional projects that will come to fruition in the next year.

These projects, plus three more, are thanks to the collaboration and work coordinated by area city, county, and other government associations, and are recommended to receive $450,000 in Innovation Funding from National Joint Powers Alliance® (NJPA).

All project applicants and several local government leaders gathered at NJPA on June 1 for the 2017 Innovation Funding Review Day. Nine groups presented and fielded questions about their initiatives with a total request of $848,600 in funding, nearly double the amount available for 2017-18.

“It is rewarding to bring together colleagues and peers within the area and witness the networking, collaborations, and partnerships formed through this process,” Gruber said. “We had nine quality applications that all had visions to impact our region significantly. Any one of them could have been included in the top projects that were chosen to receive funding.”

Individuals who attended the Review Day as a representative of a city, county, or other government association within Cass, Crow Wing, Morrison, Todd, or Wadena counties (Region 5) ranked the projects. The top five projects will receive full funding, with the sixth-highest ranking project slated to receive partial funding.

NJPA regional program director Paul Drange will present the recommendations to the organization’s Board of Directors at its June 20 meeting. The projects will come to contract after July 1, 2017.

Innovation Funding for City & County Solutions and Education Solutions began in 2014-2015 as a project partnership opportunity to help public agencies in Region 5 fund initiatives aimed at creating collaboration and improving the region. NJPA works alongside regional initiatives and financially supports them to ensure successful regional impact.

The Crow Wing County Sheriff’s Office, Baxter Police Department, Brainerd Police Department, Brainerd Fire Department, and Crosslake Fire Department - $80,000 - This request is to fund the purchase and implementation of an Unmanned Aerial System, or drone, to be shared within Region 5 and deployed in emergency situations to help save lives. Examples include missing persons, search/rescue/recovery operations on bodies of water, delivering a personal flotation device to a victim waiting to be rescued, determination of dangerous obstructions at a scene, hot spot detection at a fire scene, an aerial view of incidents such as a train derailment or structural collapse, and more. Funding would allow the purchase of equipment, as well as completion of training and federal regulatory requirements.

The Morrison County Sheriff’s Office $100,000 – The Morrison County Sheriff’s Office will use its Innovation Funding to purchase a Mobile Command Trailer to be shared by the sheriff’s departments in Cass, Crow Wing, Morrison, Todd, and Wadena counties. A Mobile Command Trailer (MCT) provides a portable emergency and disaster communications unit that can be deployed anywhere quickly, allowing for a controlled, effective response. Response personnel, along with dispatchers, are located at the site to increase the effectiveness and timeliness of sharing information. The MCT will also be used as a mobile learning station for citizen outreach and education.

The City of Little Falls $85,000 – Little Falls plans to purchase a closed-circuit television system to be used for sewer inspections. The camera would be loaned out to other cities and counties to observe the condition of pipes and enable the prioritization of replacement. According to the application, the project is due to the shortfall in funding to replace aging infrastructure; and, if awarded, the city would purchase the equipment and keep a calendar so other agencies (cities and counties) could reserve the equipment for a one-to-two week period.

The City of Eagle Bend $90,000 - Hilltop Regional Kitchen will use its awarded funding to support the current construction of the facility, primarily adding on a new entrance, parking lot reconstruction, and other external necessities. The current facility, built in 1906 and purchased by seniors in 1970, is the hub for Meals on Wheels, Bundled Services, and congregate meals for Todd and Wadena counties. On average, the kitchen produces 5,000 meals per month to the communities of Long Prairie, Browerville, Clarissa, Eagle Bend, Bertha, Hewitt, Motley, Staples, Wadena, and Verndale. A new kitchen facility in Eagle Bend will ensure residents have the necessary nutrition and services they need to stay independent and in their homes. The facility will increase effectiveness of meal production, safer space for kitchen staff and volunteers, additional storage for ingredients, provide a dining area for congregate meals, and also provide space for the Senior Center to be relocated.

The Regional Food Co-op Coalition $49,600 - Led by the city of Crosslake, the Regional Food Co-op Coalition will use its funds to launch an educational campaign, emphasizing the value of food co-op membership/ownership and purchasing. Supported by six food cooperatives and communities from Region 5, the proposal allows for all regional food co-ops to work together on a campaign that relays the economic value of purchasing from local food retailers, who in turn purchase from local growers and providers – creating and retaining our regional wealth. The campaign will also focus on the personal benefits of purchasing healthy foods and further advise how neighbors and coworkers can help each other become food co-op members/owners.

Friendly Rider $99,000 requested, recommended funding of $45,400 –The Friendly Rider is recommended to receive partial funding for the installation of WiFi on eight of its transit buses, 12 school buses in four school districts within Wadena and Todd counties, as well as one to three buses for Tri-Cap Public Transit in Little Falls and Rainbow Rider in Long Prairie. According to its application, access to WiFi on public transit and school buses will allow residents and students to access their electronic documents, answer emails, search for a job, start homework assignments, and more during their commutes. Friendly Rider is working to create a partnership between Todd and Wadena counties, four school districts in Wadena County, and Central Lakes College, as all have identified the need to expand WiFi services for business, school, and personal purposes.