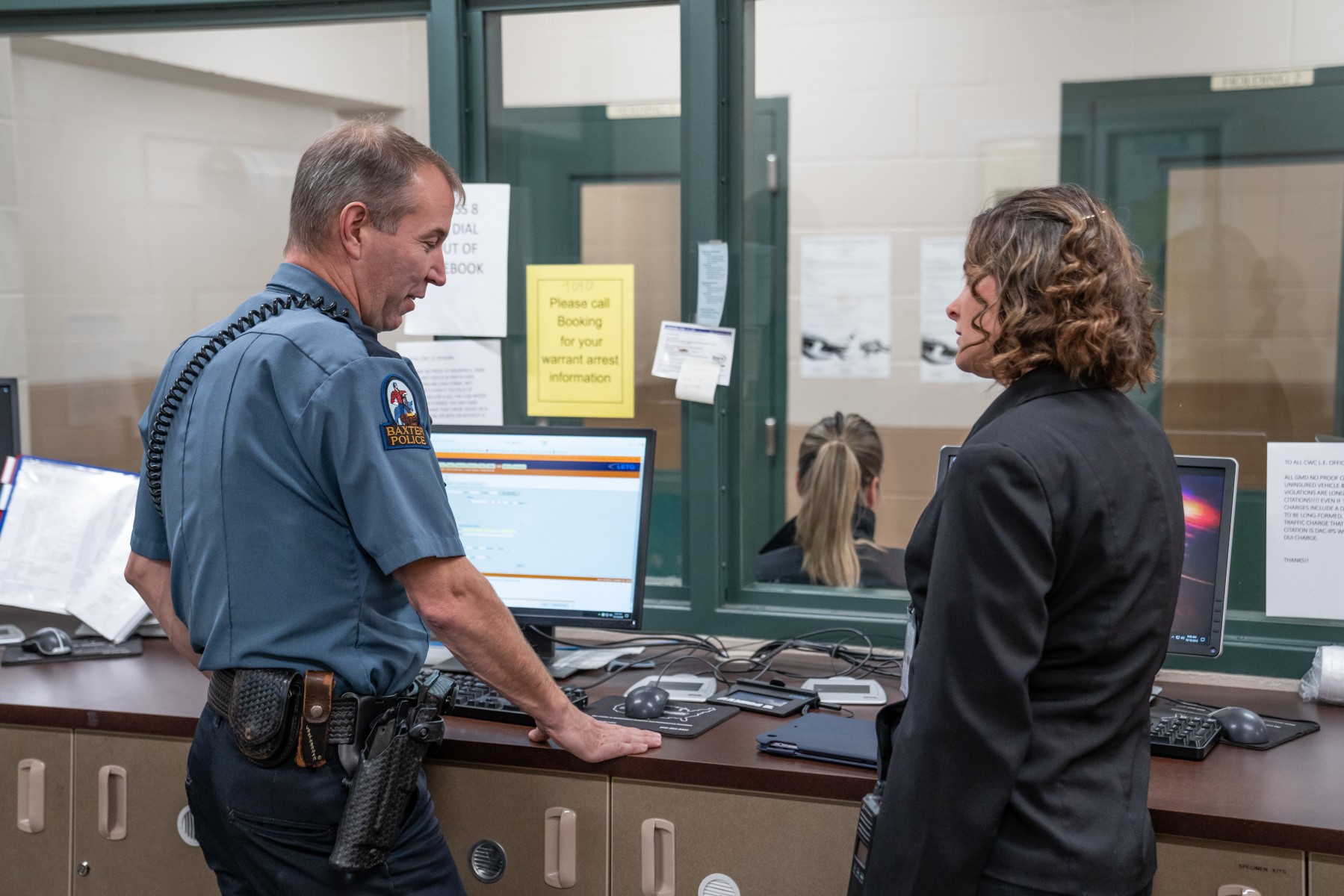 For an unprecedented number of individuals booked into jails across the country, mental illness is a significant, yet undetected, culprit. Region 5 is not immune to that statistic.

According to the National Center for Mental Health and Juvenile Justice, 10 times more people with mental health conditions are in correctional settings versus hospitals, and one in five people in jail has a serious mental illness.

A pilot program recently launched in Region 5 – and supported through Sourcewell Innovation Funding – is already making a difference in helping individuals with mental illness through diversion, early connections with resources, and services and developing discharge plans that truly meet their needs.

Tami Lueck, adult services division manager with Crow Wing County Community Services, is leading an endeavor coined the Region 5+ Comprehensive Re-Entry Project. This program’s mission is to provide a comprehensive continuum of care to those who come into contact with the law enforcement community. The program will provide early assessment of any mental health or substance use needs for those who enter the jail.

“When a crime has been committed by someone who is mentally ill, they may end up going to jail rather than getting the help and resources they need,” Lueck said. “And that’s all over our state, not just something we’re facing here in our region. Jails are not the appropriate place for people with mental illness.”

Based on data provided by Crow Wing County, 36.7 percent of those booked into jail could be eligible for diversion from detention due to mental illness. Additionally noted: discharge planning efforts in the county have shown a reduction in reoffenses. In 2017, 68 percent of those individuals with discharge plans did not return to jail. This is on track with a 68 percent national average for the first year following discharge.

For Lueck, it all boils down to improved care and timely identification of needs, as well as a streamlined approach throughout the region to access crisis mental health services, diversions, and care for those incarcerated.

After receiving $287,000 in Innovation Funding, the Region 5+ Comprehensive Re-Entry Project was launched in June 2018. A collaboration among the counties of Cass, Crow Wing, Morrison, Todd, Wadena and neighboring Aitkin County, this endeavor was modeled after the Yellow Line Project in Blue Earth County. According to YellowLineProject.com, the program is designed to provide an early response to individuals with acute or chronic mental or chemical health problems who have become involved with law enforcement and are not a risk to the community.

The Yellow Line Project enhances the resources and tools available to law enforcement so that residents get the right services at the right time and have strong incentives to participate in those services.

Lueck said this process was eagerly embraced by other counties around the area, from social and community services to law enforcement and mental health providers.

“Our jail staff came forward with their own concerns of not feeling equipped to manage and serve people with mental illness,” Lueck explained. “The lack of inpatient mental health beds across the state also puts pressure on emergency departments. People act out behaviorally and end up in jail. And mental health stakeholders in our communities are concerned about this. It’s really sad that we’ve gotten to a place where that’s how we serve people with mental health issues.”

As part of the Region 5+ Comprehensive Re-Entry Program, social workers are placed in jails to conduct a 20- to 30-minute screening per individual to determine if mental health issues are present. If not done immediately after someone is brought to the jail, assessments are provided within the first 24 hours following incarceration.

If mental health issues are detected, social service workers are able to intervene and help connect the individual to a resource that can treat the root of the issue – whether it’s a temporary residential crisis stabilization home, an inpatient facility, or other source of appropriately handling a mental health situation.

Jails are not the appropriate place for people with mental illness.

In some cases, there may not be a diversion but perhaps an early discharge or discharge with a mutually agreed upon plan.

“We had a case where we were able to assess an individual coming into the jail,” Lueck said. “We agreed on a discharge plan. They went to stay at a trusted friend’s home. The charging officer, the individual, and social services worker were all in agreement that this plan would work and that the individual wouldn’t be a risk to the community. The charges were held by the officer, but the agreement stipulated that the charges would be forwarded if the individual didn’t comply with the plan.”

Another aspect of the initiative is to equip law enforcement with the knowledge and resources they need to deal with mental illness issues on the front end.

“Sometimes, jail personnel or law enforcement just don’t know all of the resources available for people with mental health issues,” Lueck added. “Officers have felt like they only have three options: detox, which is limited; inpatient hospitalization, which also comes with limited bed resources; or incarceration. By providing this education, it allows officers to do their jobs and we can come in and do the pieces we’re good at. It focuses on partnerships and furthering the relationships between social services and law enforcement.”

“Whether it’s an intellectual disability, chemical or drug dependency, or a mental health issue – are they really getting the care they need when they have to ride in the back of a squad car during a crisis? What are the odds of asking for help when that happens? We need to work together to decriminalize mental illness.”

Baxter Police Chief Jim Exsted said his department was approached with the idea for a mental health initiative in 2017.

“For law enforcement, we saw this diversion program as an opportunity to provide help to individuals by offering resources instead of sending them to jail,” Exsted said. “This program has offered another tool for law enforcement in Crow Wing County when they find themselves dealing with an individual who is struggling with a mental health issue.”

And while the diversion side of the program hasn’t been as large in numbers as anticipated, the impact it has had on those affected has been significant.

“Initially, we estimated as many as 20 to 30 percent of individuals headed to jail could possibly be diverted,” Exsted added. “At this time, we are finding that the diversions are much less than that in Crow Wing County, but the diversions that do occur are extremely impactful. Additionally, the program has allowed the social worker embedded in the jail to meet with and offer services to most individuals who are booked into the facility.”

Through this process, Lueck said positive relationships have been forged – including between social services staff placed in the jail for assessments and the individuals they are able to serve.

“It’s been interesting to see how relationships are being created. That makes such a big difference with this population. And, on the flipside, employees at the jail appreciate having a social worker there to consult with and ask questions of. There are truly many benefits to this initiative.”

While Crow Wing County has served as the pilot for this program, neighboring counties are also putting plans in place to follow suit, with each incorporating a design team consisting of, but not limited to, the county attorney, sheriff’s office, social services, police chiefs representing the cities in each respective county, and mental health providers to discuss, support, and carry out the process.

“The communities throughout Region 5 have a lot of good mental health support systems,” Lueck noted. “Our hope is to connect those with mental illness to the resources and services they need. And, hopefully, through a variety of scenarios, we all learn how to better manage difficult situations. But, with the right strategies in place, we can all work together to improve the likelihood of individuals getting access to the services they need and the support they deserve. And that’s the bottom line.”

Sourcewell (formerly National Joint Powers Alliance) is a self-supporting government organization, partnering with education, government, and nonprofits to boost student and community success. Created in 1978 as one of Minnesota’s nine service cooperatives, we offer training and shared services to our central-Minnesota members. Throughout North America, we offer a cooperative purchasing program with more than 300 awarded vendors on contract. Sourcewell is driven by service and the ability to strategically reinvest in member communities.