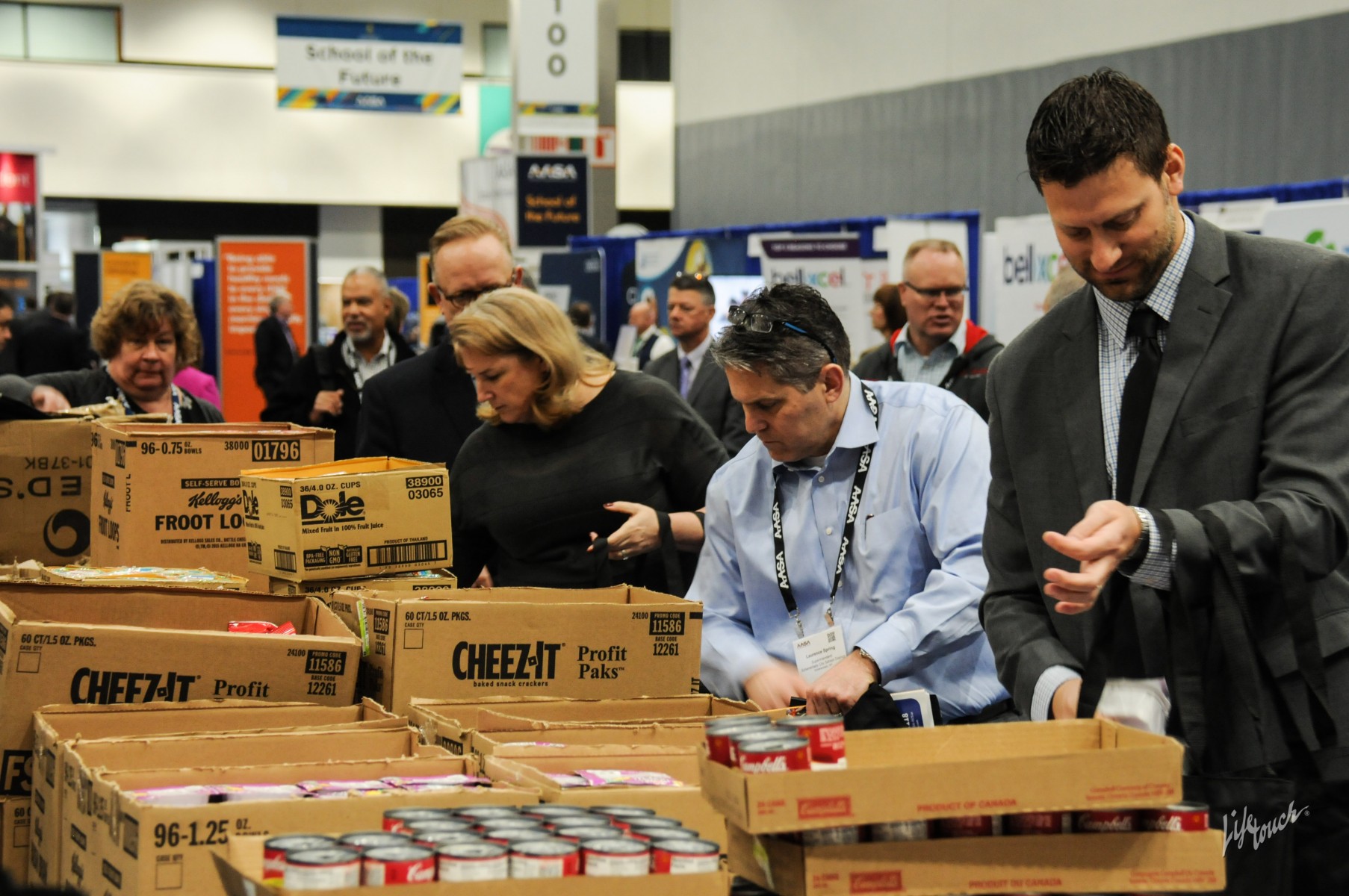 Blessings in a Backpack
“

Sourcewell was proud to partner with AASA and Blessings in a Backpack to offer this food packing event in Los Angeles, bringing meals to an estimated 1,000 children. At Sourcewell, we strongly believe in reinvesting to support our students and this program aligns well with that endeavor.

At least 1,000 elementary students in Los Angeles are unpacking backpacks full of food this week because of a cross-country partnership coordinated from central Minnesota. Leaders from Sourcewell, AASA, and Blessings in a Backpack teamed up to fill black canvas backpacks with cereal, soup, and snack crackers.

An assembly line of superintendents, educators, and business representatives attending the AASA School Superintendents Association national conference in L.A. last week stuffed the backpacks in an exhibit hall and then piled them into boxes — all in the span of an hour. A team of freight workers then delivered them to the Los Angeles Unified School District schools.

Blessings in a Backpack, based in Louisville, Ky., helps feed an estimated 87,000 children a year through its backpack drives and other charitable efforts. AASA teamed up with Sourcewell to support this year's drive in Los Angeles. Sourcewell is a service cooperative in Staples, MN that specializes in cooperative purchasing.

Sourcewell CEO and Executive Director Dr. Chad Coauette credited Manager of Business and Membership Development Liz Wambeke for her work in helping make this event happen. Wambeke helped connect, communicate, and coordinate in the 10-months leading up to the AASA national conference.

“Sourcewell was proud to partner with AASA and Blessings in a Backpack to offer this food packing event in Los Angeles, bringing meals to an estimated 1,000 children. At Sourcewell, we strongly believe in reinvesting to support our students and this program aligns well with that endeavor.”

Tom Turrell, superintendent of Byers School District in Colorado, was among the educators who made multiple loops to stuff bag after bag as part of this year's Blessings in a Backpack drive.

“The kids are used to getting meals at school, but it's a three-day weekend here so it will give them at least a couple of meals,” said Turrell, as he tossed in another pack of Raisin Bran into the bag he was toting.

As the second-largest district in the country, LAUSD has many students who could benefit from these backpacks. About 80 percent of the district's 694,000 students are from low-income families.

While superintendents at the AASA meeting hail from various parts of the country, many can relate to the fact some students need help meeting their basic needs. For some kids, eating is easier said than done, and they depend on school meals to get through the day. But when there is no school, they need a backup plan.

“We're pretty small and rural at our district, but you still see that need there,” said Jeff Clark, superintendent of Hitchcock-Tulare School District in South Dakota, as he packed yet another backpack. He was still going strong when all bags were full. “We try to help them when they need it,” he said.

As soon as he realized all bags had been fully stuffed, Turrell scrambled to place the leftover food items in some bags.

Jennifer Rooney, AASA's director of meetings and awards, said this is the first year that AASA has run a Blessings in a Backpack drive.

Steve Bliss, a retired chief information officer from New Berlin, N.Y., was standing in, doing his part to fill the bags.

“This is just what we do. We're teachers,” said Bliss.

Sourcewell (formerly National Joint Powers Alliance) is a self-supporting government organization, partnering with education, government, and nonprofits to boost student and community success. Created in 1978 as one of Minnesota's nine service cooperatives, we offer training and shared services to our central-Minnesota members. Throughout North America, we offer a cooperative purchasing program with more than 300 awarded vendors on contract. Sourcewell is driven by service and the ability to strategically reinvest in member communities.